To help modernize its restaurants and provide new ordering experiences to its diners, Taco Bell is bringing new technology into its brick‐and‐mortar restaurants across the country: The quick‐service restaurant (QSR) chain is deploying self‐service kiosks. The devices enable customers to peruse the Mexican‐inspired chain's menu and customize its selections to their tastes or dietary needs.

Diners can, for instance, swap out beef for beans in the Crunchwrap Supreme to make the dish vegetarian. And, if customers want to bring on the heat, they can add jalapenos to a bean burrito. After diners make those kind of decisions, they can use the kiosks to pay with their credit cards or the restaurant's gift cards. But customers don't have to pay at the kiosks, as the company allows diners to place their orders on the devices and then pay with cash at the counter. 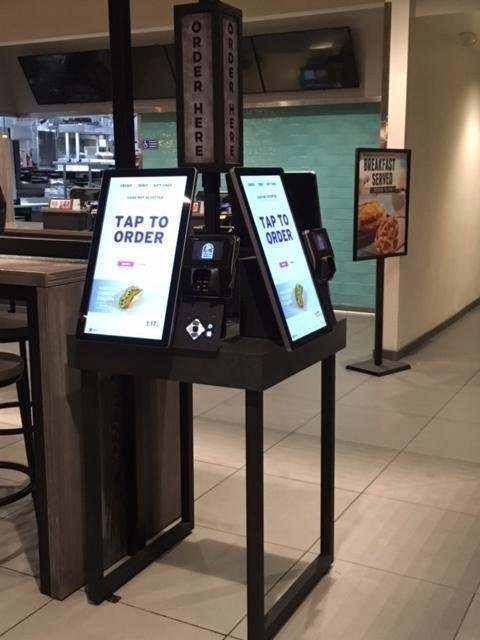 The kiosks are part of Taco Bell's digital strategy, which is dubbed All Accessand is geared toward letting diners interact with the company in whatever manner they'd like.

The kiosks themselves provide customers a modern way to explore and order on a large-format digital experience, Taco Bell Senior Director of All Access Rafik Hanna said in an interview with PYMNTS.

To power the kiosks, Taco Bell tapped touchscreen technology provider Elo for its Android architecture. Elo noted in the release that the kiosks, which will soon be in over 6,000 locations, can be controlled in one place. As a result, the restaurant chain can help increase security and uptime while lowering operating costs. The kiosks themselves are said to be all‐in‐one devices that were created for high‐traffic, public environments.

The aim behind the initiative is to allow customers to place their orders through their preferred channel.

Hanna said the company's strategy is to deliver a frictionless experience for our customers, and allow them to order Taco Bell in any way that suits them best; this includes online, on the mobile app, Grubhub delivery, drive‐thru and in‐restaurant through a digital ordering experience.

And, as of December, the company had them in more than 1,000 locations in the U.S.

Going forward, Hanna noted that diners will notice kiosks brought to Taco Bell restaurants in their area. When it comes to other technologies, he said the company is testing digital menu boards for drive‐throughs in a number of locations nationwide. Overall, he said, the company will continue to improve its experience through its retail touchpoints as digital becomes a larger part of its restaurants. 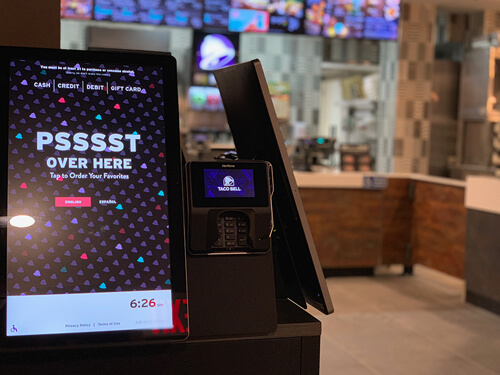 The Kiosk Market
Taco Bell is not the only QSR chain that has brought in‐store kiosks into its locations: McDonald's said last June that it wanted to bring self‐service stations to its U.S. stores at the rate of 1,000 per quarter over an eight‐to‐nine quarter period. McDonald's CEO Steve Easterbrook said, according to prior reports, that in the past, diners could only use the drive‐through or walk up to the counter to place an order. That is no longer the case, as the company is now rolling out more alternatives.

Easterbrook said, according to CNBC, They can order through mobile, they can come curbside and we'll run it out, as well as the existing traditional ways. You can pay in different ways and customize your food in different ways. On a call with analysts in October, Easterbrook said the restaurant is seeing higher average tickets with the use and popularity of self‐order kiosks because people dwell longer.

Beyond kiosks, the index also found that QSRs are tapping into online/app orders, in‐store pickup and drive‐through pickup, among other options. But recent plans by QSRs like Taco Bell and McDonald's to expand their kiosk deployments suggest that kiosks are gaining traction with QSRs in restaurants across the country.